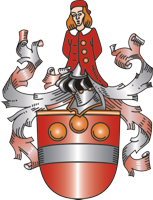 By will dated 08/15/1870, Carl von Heß (born on 17/10/1788 in Fulda, died on 10/02/1872 in Bad Kissingen and buried in the von Heß family crypt in the Hammelburg city cemetery) made his inherited assets of approximately 288,000 guilders available for charitable purposes, and assigned the founding of a district hospital and prebendary nursing home in the city of Hammelburg to his main and only heirs.

At the same time, the founder specified in his will that the yet to be established district hospital and prebendary nursing home in Hammelburg should establish and maintain an infant care facility and a rescue and educational institute for (pre-)school-aged children that would meet the actual needs of the city of Hammelburg.

Finally, the testator Carl von Heß determined in his will that the district government of the former district of Hammelburg should manage the foundation's assets. As of the local government reform in 1972, this is now the Bad Kissingen district.

The Carl von Heß'sche hospital and prebendary nursing home foundation in Hammelburg was sovereignly approved in March, 1873. The approval was given in the Official Journal of the Royal Ministry of the Interior No. 23 dated 13/03/1873.

In the enactment of the founder's will, the foundation management built:

At that time, the hospital and prebendary nursing home could only accommodate 3 male and 3 female prebendaries. The main purpose of the institution was to admit, care and cater for sick servants, apprentices and journeymen from all over the Hammelburg district. In 1900, increasing nursing operations required facilities to be expanded with an isolation block, and in 1913, a new operating room that corresponded to modern requirements.

Due to post-war conditions, in particular because of the establishment of 2 camps for displaced persons and refugees in Hammelburg (national transit camp and government refugee camp), a branch hospital was operated in the government refugee camp from 1946 until 14/08/1956 in addition to the hospital and prebendary nursing home.

In 1956, the hospital and prebendary nursing home in Hammelburg and the branch hospital in the government refugee camp could no longer meet increased requirements and progress in the medical field, so a new district hospital was established and partially equipped by the district of Hammelburg. It was handed over for its intended purpose on 15/08/1956, and has since been maintained and operated by the Carl von Heß'sche Kranken- und Pfründerspitalstiftung (Carl von Heß hospital and prebendary nursing home foundation). At the same time, the foundation's 1878-established hospital and prebendary nursing home on von Hess Street was given to the district of Hammelburg to be run as a retirement home. The hospital was expanded in 1984, continuously adapted to meet modern medical requirements and last had 140 approved beds. For economic reasons, the Carl von Heß hospital was sold to Rhön-Klinikum AG on 01/01/2004. The foundation no longer operates hospitals.

The Dr Maria Probst retirement home was originally built in 1969 and fully renovated in 1999.

The foundation's former administration building was built in 1971 along with the nurses' residency, which has been used as nursing home building II since 1984.

The orphanage from 1876 was closed in 1975 after 99 years due to lack of assets. The kindergarten was given to the city of Hammelburg in 1980.

Finally, the foundation took over the Bad Brückenau and Münnerstadt nursing homes in the Bad Kissingen district from 2003 for the next 32 years. The intention was to create a synergy by bundling the same tasks.

On July 30, 2004, the foundation established a limited company (GmbH).

Since April 1, 2011, the foundation has also been operating the Haus Rafael retirement home in Zeitlofs with 41 nursing home spaces, bought in 2010 from the Bavarian Blind and Visually Impaired Federation in Munich.

As of 01/01/2013, the Juliusspital in Münnerstadt, another facility in the Bad Kissingen district, was integrated into the foundation.

Juliusspital has a retirement and nursing home with 75 spaces, an outpatient service, a specialised unit for family caregivers, a dementia centre and serviced living in the St Michael building.

Through the ages and until today, the foundation has cared for the sick and the elderly citizens of our district according to the founder's will, and this is the way it should stay. The economic requirements are fulfilled.

In addition to this public law foundation, the founder also prompted another foundation, namely the family and cemetery chapel foundation. This foundation built a church with a crypt for the Heß family in the Hammelburg city cemetery. The cemetery chapel is in excellent condition and is still used as a church.