Carl von Heß, born 17/07/1788, was the second youngest of three unmarried sons from the Fulda privy councillor and estate owner Philipp von Heß and his wife Gertraud, nee Wankel, a native of Hammelburg. After attending the Hammelburg high school, he studied philosophy and forestry in Würzburg. He soon resigned the forestry service to devote himself to the estate he acquired in Schwärzelbach. He then built a hotel in Bad Kissingen and retreated to a private life. According to visitors’ list No. 19, a countess from Hohenembs (as guest No. 517) with an entourage of 24 came to Bad Kissingen and took up quarters with Carl von Heß. The countess with the large entourage was none other than Empress Elisabeth of Austria, affectionately known as "Sissi".

This property in Bad Kissingen, land in the Bad Kissingen and Hammelburg districts with mortgage and manuscript capital with a total value of around 283883 guilders (approx. 7,500,000 DM) formed the basis of the Carl von Heß hospital and social foundation, which Carl von Heß brought into existence with his death on 02/10/1872. The foundation's mission was to establish and operate a retirement and nursing home, an orphanage and a kindergarten in Hammelburg. He also supported outpatient services. Even the parish church, civil hospital, alms house and schools received notable legacies.

During his lifetime, Carl von Heß had the Heß family crypt with a cemetery chapel built according to his plans in the Hammelburg city cemetery. Finally, the testator decreed that his foundations be run by the respective district governments (now the district council and its hospital and foundation committee), with the involvement of the respective Catholic priest of Hammelburg, even should he not be legally appointed for this purpose.

The youngest of the 3 sons, Bernhard Franz von Heß (born 1792 in Hammelburg) also achieved fame and honour. After attending the Hammelburg high school, he studied mathematics and natural sciences in Würzburg. Afterwards, he voluntarily joined the Fulda Landwehr with his own armament, and in 1814 took part in the allied armies' campaign against Napoleon in southern and central France under Prince Schwarzenberg. After Fulda’s eventual transition to Bavaria, he joined the Bavarian services and went to Greece with Prince Otto, who became king there. B. Franz von Heß rapidly climbed the military ladder, reaching royal aide and minister of war. During the 1843 revolt against Otto, he evaded the violence only on express orders from his master. After 10 years of absence, he returned and began his career in the Bavarian army anew as a captain. His great military achievements earned him the rank of major general in 1853, and in 1862 he became a lieutenant general. When he retired in 1867, he quickly lost his strength, despite selfless care from his brother Carl von Heß in Bad Kissingen, where he died in 1869.

Carl and Bernhard von Heß were united in their wish to contribute their family fortune to charitable and non-profit purposes in the service of the sick and the elderly. The von Heß foundations are still a term that generates gratitude towards the founders; their names have entered the modern history of the city. 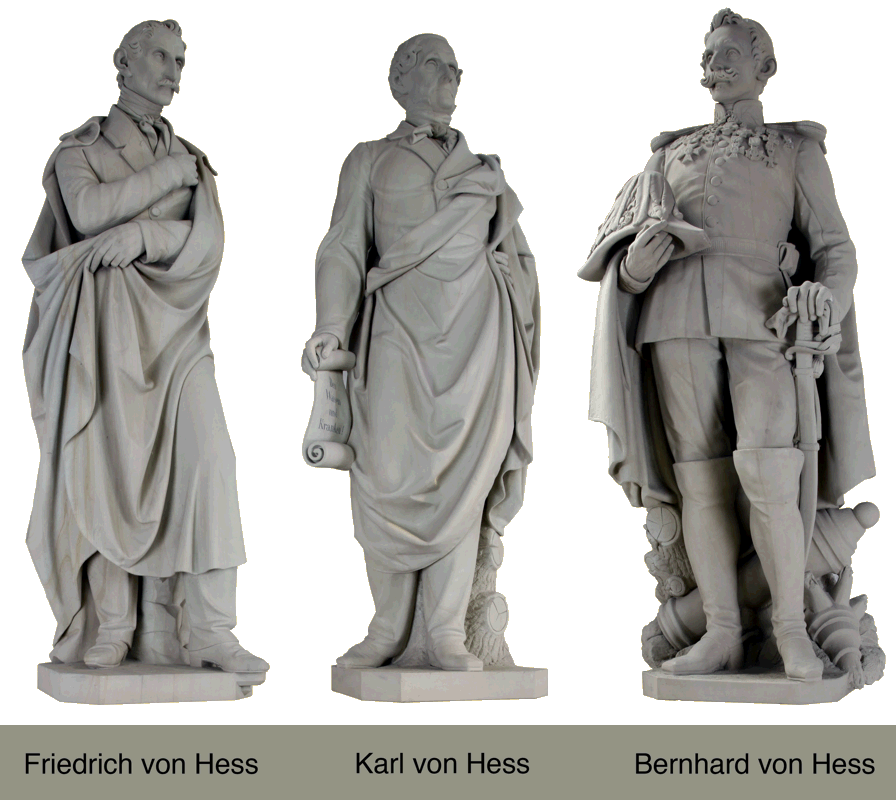