The Heß coat of arms 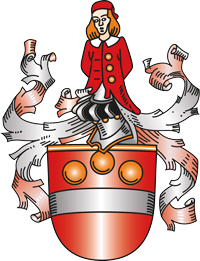 The von Heß family coat of arms has been described differently:
In the Würzburg "Armorial of Gentlemen Councillors", the coat of arms of court councillor Heinrich Christian von Heß is pictured in colour, but not described in words.

In "Siebmacher's armorial", the three round shapes are not referred to as spheres, but as "balls". According to Jäger, the coat of arms of Andreas Heß was called "drei Pfennige" (three pence) in the 17th century.

These contradictions could not be clarified, but the round shapes are identical even if described differently.

Therefore, in all cases, the same coat of arms is being referred to.

The von Heß family line ended with the death of Carl von Heß. The missing arms of the youth on the foundation coat of arms can be seen as the symbol for the establishment of the Carl von Heß'schen Sozialstiftung.

All of the family assets were designated to establish the foundation and use for social purposes.

Thus, the youth no longer has arms, because they have been symbolically given to the foundation in order to carry out social projects.